2019 has been a monumental year for VCAS! From trainings, placements, fundraisers and events - the year’s been bustling and impactful.  This year VCAS placed three rescue dogs, hosted four six-week dog-training classes and kicked off its alumni outings program touching the lives of several veterans and military families. None of this would be possible without the incredible support of our volunteers and donors – Thank you for making 2019 the best year yet!

The mission of VCAS is to enrich the lives of veterans, military families and dogs through the many benefits of the human-animal bond. One big way VCAS does this is through its Rescue Dog Placement Program. VCAS partnered with A.D.O.P.T. Rescue to find dogs that matched the veteran’s lifestyles and wants. VCAS covers all costs of the placement, all expenses for the first year and the veterans participate in a 6-week Frontline Dog Training Class with other veterans and military families.

As part of the Vision and Impact Program, the 21st leadership team of Next Level Trainings selected VCAS as the local non-profit they wanted to support for their Community Service Project. VIP students set a goal to raise $100,000 and using the skills developed throughout the leadership-training program, an incredible $120,551 was raised. In addition to fundraising, the VIP 21 team spent a day landscaping the American Legion Post 164 where VCAS dog-training classes were being held. VCAS is so grateful for the efforts made by these remarkable leaders. 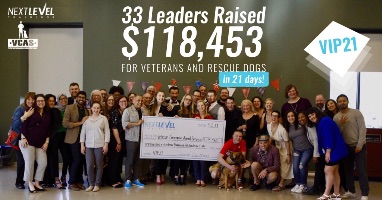 Harold Highland, Air Force veteran and resident of Westerville, Ohio was the deserving recipient of the volunteer award this spring. Harold’s passion for veterans and dogs is evident as he volunteers at events, training classes and shares the mission of VCAS at businesses throughout central Ohio. Harold’s passion is fueled by his own personal experience with a dog that touched his life when he returned home from his time in service. Harold can often be found at Captivating Canines, Westerville PetPeople and Westerville Mutts & Co. Stop on by and say hello! Thank you Harold for the way in which you served and continue to serve! 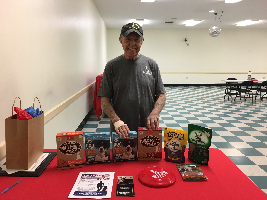 This year VCAS hosted two spring and two fall training classes. VCAS professional trainer Kristen VanNess, owner of A Frame of Mind Animal Training, covers basic obedience and does a fantastic job communicating how dogs think, what their body language means and ultimately works to increase the bond between owner and dog. VCAS would like to thank American Legion Post 164 and Hilliard Memorial VFW Post for generously providing space for the trainings. The VCAS Frontline Training Classes meet once a week for six weeks and are open to veterans and military families that currently own a dog. 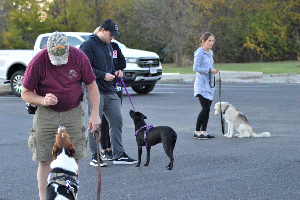 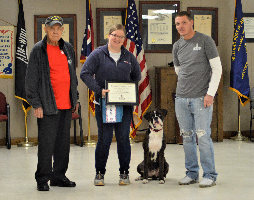 VCAS is grateful for the support of local businesses in Central Ohio over this past year. A special call out to All About the Dogs Pet Wash, The Candle Lab and the Columbus Blue Jackets for their support.  Not only have these businesses helped by hosting fundraisers but they have also shared the mission of VCAS within the community. If your dog needs washed, you want your home to smell amazing or need some great sports entertainment we recommend you check them out!